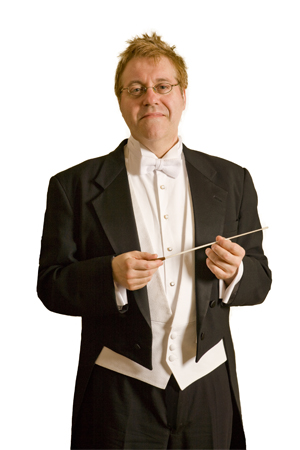 Conductor Kevin Mallon was brought up in Belfast, Northern Ireland. He studied at Chetham’s School of Music, Manchester’s Royal Northern College of Music and at Dartington College of Arts, studying composition with Peter Maxwell Davies, conducting with John Eliot Gardiner, singing and specializing in baroque violin.

He became concert-master with Le Concert Spirituel and Les Arts Florissants in Paris and led and directed The Irish Baroque Orchestra before moving to Canada to take up posts with Tafelmusik Baroque Orchestra and the University of Toronto, (positions he left to pursue his conducting career). In 1999 he founded the instrumental and vocal group the Aradia Ensemble, with whom he has toured widely, and become conductor of the Toronto Chamber Orchestra and has made over 50 recordings for Naxos. Many of these recordings have won international awards- Gramophone Editors Choice Awards, Penguin Guide Rosettes and a nomination for a Juno Award.

With Toronto’s Opera in Concert he has conducted ten baroque and classical operas. From 2004-2008, he was Artistic Director of the Irish company–Opera 2005; his seventh production with them being Verdi’s Ballo in Maschera in September 2008 for which he achieved his third Irish Times Theatre Award nomination. In 2009 he conducted Carmen and Don Giovanni in Odessa, Holland, Belgium and Spain. Kevin’s most recent appointments are as Music Director of the Thirteen Strings Chamber Orchestra in Ottawa (2010), Conductor of the Centre for Opera Studies in Italy (2010) and as Conductor of New York’s newly-formed West Side Chamber Orchestra (2011). Kevin was appointed as Music Director of Orchestra Toronto in 2013 and is presently Interim Artistic Director of Opera Lyra. He has written music for the TV series “Camelot.”